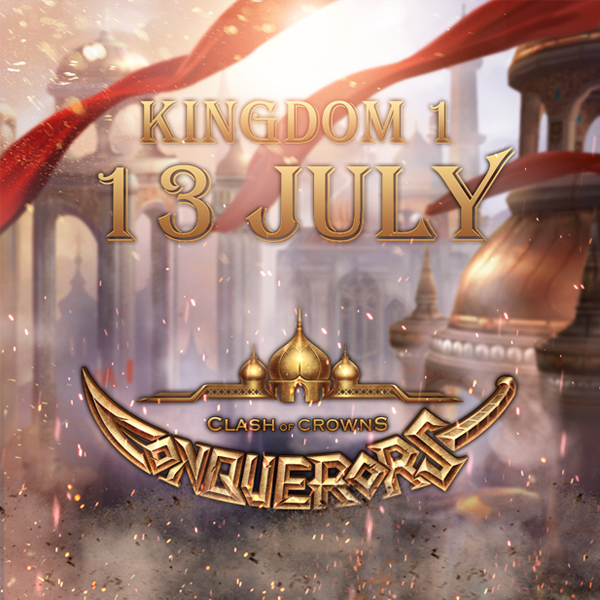 Conquerors: Clash of Crowns will arrive at the Play Store on July 13 at 02:00 (GMT +0)! If you have an Android device, join us now and embark on your journey!

Fret not, iOS users! The game is coming to the App Store really soon as well! We'll be waiting for you!

--------------------------------
Conquerors: Clash of Crown is a grand strategy game set in the warring period of historical Arabia. Establish a foothold in the World by recruiting powerful Heroes, amassing a mighty army, and conquering Provinces with your Guild. With every village and fortress conquered, you are one step closer to ultimate rule of the Palace!

☆Recruit Legendary Heroes☆
Armed with powerful skills, Heroes are versatile elites. Have them lead sieges to take down enemy cities or garrison them to safeguard your own. Experiment with different Hero combinations and give yourself a strategic edge!

☆A Rewarding Campaign☆
Progress through the Campaign to get Heroes and Equipment! Don your Heroes in full gear for great power-ups!

☆Innovative Troop System☆
Newly trained troops start out as reinforcements, and can be assigned to other types (Cavalry, Infantry, Ranged Unit, or Siege Engine) based on your needs.

☆Guild Action Galore☆
Join a Guild and seek allies to fight in Skirmishes, Guild Wars, Province Battle, Palace Warfare, and World Invasion! Teamwork will be the key to success!

☆Province Battle☆
Take over Provinces to earn your Guild rewards and bragging rights. Don’t overlook the NPC forces while you are focused on other players! Multitasking is a vital skill for success!

☆Palace Conqueror☆
No ruler is complete without a Palace of their own. Rise to be King, and enjoy privileges like renaming the World, and more!

☆Clash of Tactics☆
Outwit your opponents in the weekly Arena season, and climb the tiers for spectacular rewards!

☆The World is Your Playground☆
Freely migrate between Worlds to find one that suits your play style. Choose an emptier World to lie low and develop, or one packed with players to raid!

☆Unique Style and Gameplay☆
With a lavish Arabian theme filled with mystery and wonder, experience a fresh and unique style in both building and combat gameplay!

☆Your Own City☆
The foundation of a mighty army is a well-run city! Upgrade buildings, research Tech, train Troops, and promote Heroes to stay ahead!